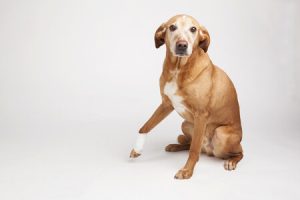 San Joaquin Valley Fever, now called Valley Fever for short, was named because of an outbreak among farm workers in the well known San Joaquin Valley of California. The condition is caused by inhaling dust or dirt contaminated with a fungus of the Coccidiodes genus. The fungus is inhaled into the lungs where it may simply cause a low grade chronic cough and calcification (mineralization) of local lymph nodes or, if the immune system is weak, it can cause pneumonia or even disseminate throughout the body.

In these places, soil is sandy and alkaline. There is little rainfall. Summer is hot and winter is cold. Fungal spores, called arthroconidia, are released from the ground after a rainfall and are carried by the wind. Earthquakes or high winds or even crop harvesting have led to outbreaks of this infection as any of these conditions can stir up fungal spores. Once the spores are in the air, they can be inhaled and set up infection.

It has been estimated that 60 percent of animals and people that become infected with this fungus never get sick. It is only when antibodies indicating past infection show up on a blood test that infection is discovered.

But the other 40 percent do get sick. It only takes one to three weeks from the inhalation of fungal spores before coughing starts. Fever, weight loss, and appetite loss accompany the cough, which can be dry or productive. If illness is limited to the lungs, prognosis is good with appropriate medication and the recovery rate approaches 90 percent.

If the fungus escapes the lung and travels out elsewhere in the body, the infection is said to have disseminated, the condition is much more serious. On the average, several months pass between the initial cough (which may be so mild as to have gone undetected) and signs appearing in another organ system. There is an order by which the fungus disseminates in that it appears in certain organs before others.

An animal or person who is sick is not contagious; infection is only through inhalation of a fungal spore released from dirt, but only a few spores are necessary for infection to occur.

A spherule of Coccidiodes fungus in a tissue. The spherule is full of smaller endospores that will eventually be released and form new spherules. Photo by CDC/Dr. Lucille K. Georg
There are several diagnostics that can be helpful with this condition.

The patient with a cough is likely to have x-rays taken of the chest. Findings will not be specific to Valley Fever; large lymph nodes and lung infiltration will likely be found. The point is to rule out other conditions that are more readily identifiable on radiographs such as heart disease, tracheal collapse, or more localized forms of pneumonia. When these more obvious conditions are ruled out, further diagnostics will be needed.

If some sort of tracheal wash or lavage is performed, where samples of lung fluid are collected for analysis, it is possible to capture some fungal spores. If this occurs, the diagnosis is confirmed, as Coccidiodes species have a fairly characteristic large size and appearance.

Blood testing is by far the least invasive way of diagnosing Valley Fever. Antibodies against the fungus are measured in a blood sample using one or even several different methods (tube precipitin, complement fixation, latex agglutination, gel immunodiffusion, or enzyme linked immunoassay). As mentioned, many patients are exposed to this fungus and do not get sick. These patients will absolutely have positive antibody tests, so it is important not to treat an animal with a positive antibody level (also called an antibody titer) and no history of symptoms of any kind. The magnitude of the antibody level should be able to distinguish past exposure from active infection.

A general rule with any fungal infection is that it takes a long time to clear. Valley Fever is no different and a year of medication administration is fairly common. Treatment continues until the clinical signs have resolved, the radiographs look normal, and the antibody level has stabilized (note antibody levels may never fully drop to zero). Ketoconazole, itraconazole, and fluconazole are the usual drugs to treat this condition. Monitoring liver enzymes is important with all of these, particularly since long treatment courses are common.

If the disease is limited to the lung, prognosis is felt to be good. The most severe form of infection appears to involve bone and when multiple bones are infected, complete recovery is unlikely unless amputation is possible. Eye involvement is painful and very difficult to clear short of removing the eye (enucleation). Obviously, a patient with any internal fungal infection should avoid immunosuppressive drugs for other conditions as their use could lead to a disastrous fungal dissemination.

Get In Touch With Us Today